It’s a pretty epic time to be a Red Sox fan. Last night, for the 15th time this season, they completed a series sweep. They’ve had the most wins in baseball for at least 90% of the season. They’re 101-46, the best record in baseball, and their best record in over 70 years.

Despite being one of the oldest and most storied teams in baseball, the Red Sox only have four seasons in which they won 100 or more games. It’s not surprising; in 126 years of MLB, it’s happened 100 times. Unsurprisingly, the Yankees have the most, with 19 seasons. But plenty of teams have never even reached the milestone, making it all the more exciting for Boston fans to be witnessing it now.

Here’s what the baseball world looked like every time the Red Sox finished the season with 100 or more wins:

What a way to break in your new ballpark! The year Fenway opened remains the Red Sox most winning-est season to date, when they finished with a 105-47 record. Oh, and then they won the World Series, beating the New York Giants. Yes, the same Giants who refused to play against them in a World Series in 1904 only to end up losing to them in 8 games eight years later. Long before ballparks installed lights, the Sox and Giants had to call a tie game simply because it was too dark to continue. While it’s likely the 2018 Sox will finally break the record set by their predecessors over a century ago, the inaugural season will always be a magnificent one. Try to tell me Fenway Park isn’t the most special place on earth. 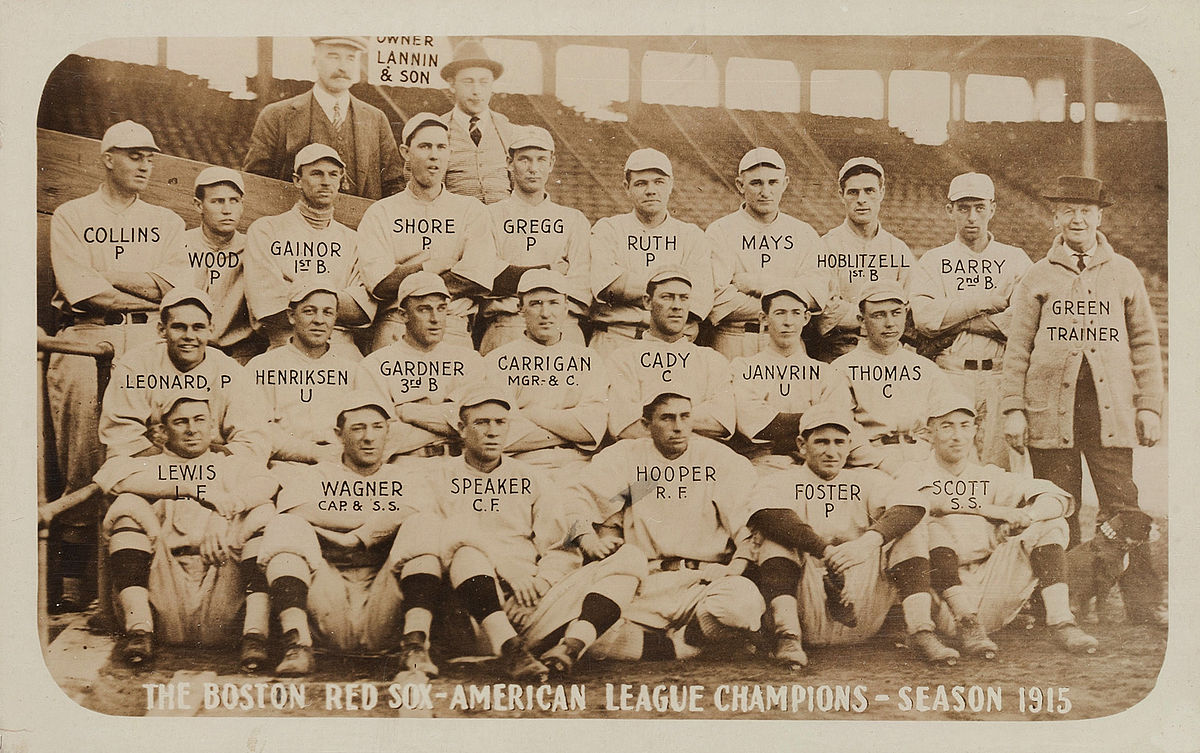 Babe Ruth’s first World Series came with the Red Sox. That season, he hit .315 with 4 homers and had an 18-8 pitching record, but didn’t pitch in the World Series against the Philadelphia Phillies. Though Ruth would go on to win with the team again in 1916 and 1918, his first World Series season in Boston would be their only one with 100+ wins. Coincidentally, it would be Boston’s last 100+ season until 1946. Another part of the Curse of the Bambino, maybe?

Ahead of one of the Red Sox most famous World Series failures came a magnificent season. Their last 100+ win season until now, to be specific. With postwar America booming and Ted Williams home from war, playing on a team with Bobby Doerr, Johnny Pesky, Dom DiMaggio, and Boo Ferriss, to name a few legends of the game, this team was unstoppable… right until the bitter World Series Game 7 end. Pesky’s supposed error against Cardinals runner Enos Slaughter would become part of Curse lore, and the Sox wouldn’t win 100 games in a single season again until this year.

I won’t say too much, because we still have a ways to go. BUT, seeing the W column hit triple digits for the first time since long before my parents were even born has been thrilling. It’s crazy to think that David Ortiz won three World Series rings and had even more incredible seasons, but never reached this milestone. Whatever comes in October, I’ll do my best to remember that this regular season is unforgettable.

View all posts by Gabrielle